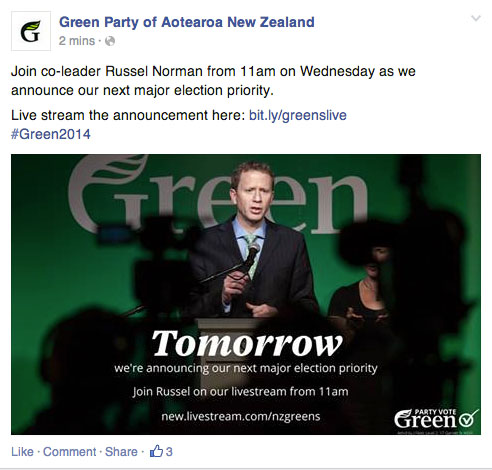 I blogged last week about Labour’s live stream of their ICT launch, I have also blogged in the past about the Greens use of live stream. What I haven’t looked at so much is how they both promote the events before hand. It is all good and well having live streams but if people don’t know they are happening, then what is the point?

The Greens are announcing a new policy today, with a live stream. I know this because they have put out a graphic on both Facebook and Twitter.

Live streams are a great way to get people involved in the policy announcement process, and getting around the mediation of the media. But this only works if you promote the event. As well, live streaming is still relatively new to the New Zealand political world, so it is not something that people expect to happen, making promotion of the even even more important.