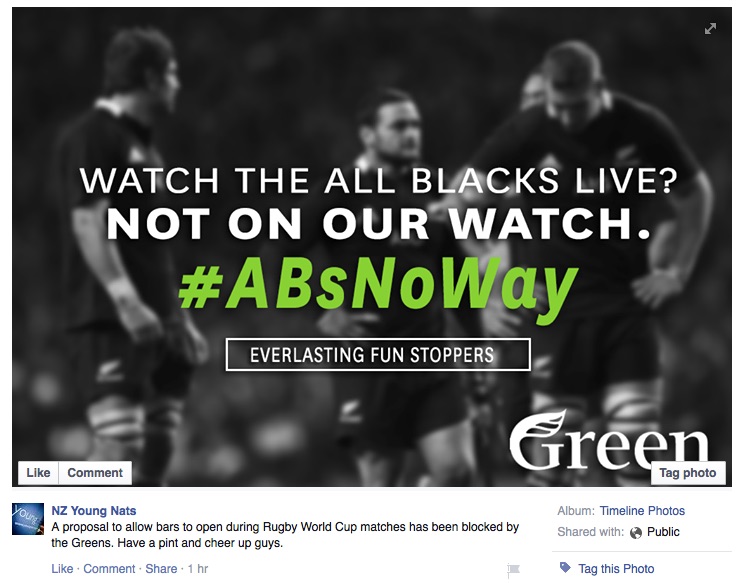 Earlier today the Greens objected to David Seymour introducing legislation that would create a blanket allowance for pubs to open, and serve alcohol during early morning matches from the Rugby World Cup this year.

Needless to say, there are those who are trying to make political gain out of this. One of the first that I have come across, at least from part of a political party, is the Young Nats. Around 6:30pm they posted the following graphic:

Now I will ignore the fact the Young Nats are using another parties logo, as well as using an image of the All Blacks that I doubt they have permission to use, because there is something rather more interesting about the graphic. One of the players featured in the image the Young Nats have used is well known All Black Piri Weepu. Piri has been making waves on social media lately with his rather well received, and circulated, views on the Trans Pacific Partnership Agreement.

Now surely if you were going to try and attack another party, you would want to make sure your graphic doesn’t feature someone who is highly critical of the policies of the party you are from?

Also, its not like the person behind this hasn’t been paying attention to the Greens social media, and discussion around the TPPA, since the Young Nats graphic is obviously based on the Greens own anti TPPA graphics that have been coming out in the last few weeks.