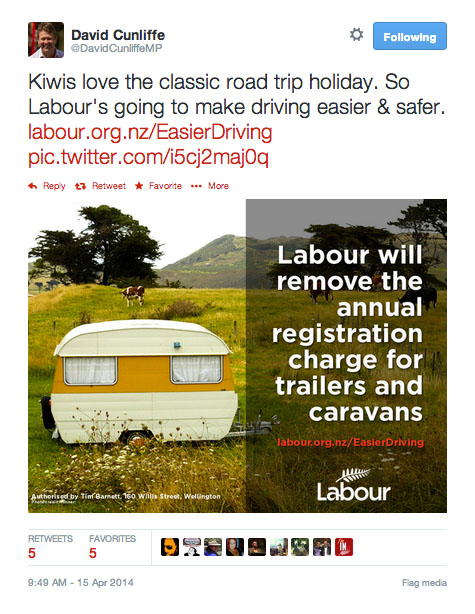 Or at least that is Labour’s plan with their latest policy announcement. Yesterday, on Breakfast David Cunliffe announced part of Labour’s transport policy. The aspects they are focusing on in this policy announcement are based around removing trucks from the fast lane of 3 and 4 lane motor ways, removing the registration fees for light trailers and caravans and changes to the Road User Chargers for motorhomes.

With that background info out of the way, lets look at the image that Labour have used on social media. It is a good social media graphic. It is simple, it is clear, it has a nice image, it is balanced and it doesn’t mention the opposition. There was no mistake with the spelling or grammar of the tweet or the image. However, the spread of the message hasn’t been the greatest, but then again, a lot of his latest graphic tweets haven’t been getting much in the way of retweets, considering he has over 8,000 followers.

The quality of these graphics, compared to things like National’s peek inside the Labour war room graphic, David Cunliffe talking jobs, and images like the one in Labour’s problems run deeper, is much higher. This is a good thing. Social media and those who use it, have a habit of latching on to the little mistakes other users make. If you want to be able to get your message out without people being distracted, you need to get the basics right.