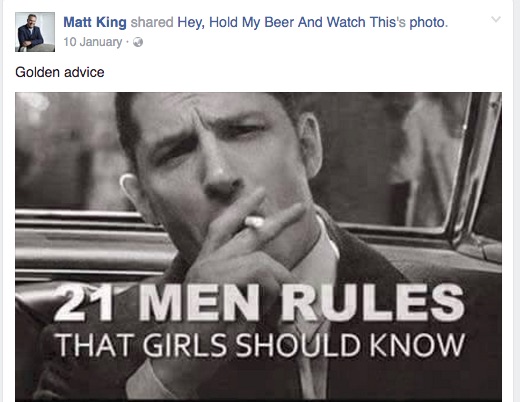 Well 2017 is here, which means it is election year! I am looking forward to another year of blogging about the election and social media. So lets get this year off to a start shall we!

For most parties, candidate selection is in full swing, with a number of parties having already selected candidates for some seats. Once a candidate’s selection has been publically announced, I am of the view that their actions on social media are subject to scrutiny. So sadly, the first election related blog post is about something less than wise a candidate has shared.

For some reason I ended up on his personal Facebook profile this evening, and I can’t even remember why. But there were a surprising number of posts set to public. Many of them were links to media stories or blog posts about himself and his selection. But there was one that caught my eye. On January 10 this year he shared a post from a Facebook page called “Hey, Hold My Beer And Watch This'”. His comment upon sharing was “Golden Advice”. Here is a screen grab in case it gets deleted:

The whole image is:

Now misogyny in society in general, and politics in particular, has been a very hot topic. So sharing a post such as this, and endorsing it, might not be the best idea for an aspiring candidate. Now some will say “it was on his personal profile”, and that is true, but the post is set to public, so he is obviously happy for people to see it. Also, once you become a candidate, all of your actions, including on social media, are subject to public scrutiny.

In an ideal world, a candidate is seeking to represent all of those who live within an electorate. If they are sharing content like this, it calls into question their views on women, and whether or not they will be able towhether they can empathise with the issues of female constituents fully represent the interests and issues of the women living in the electorate.