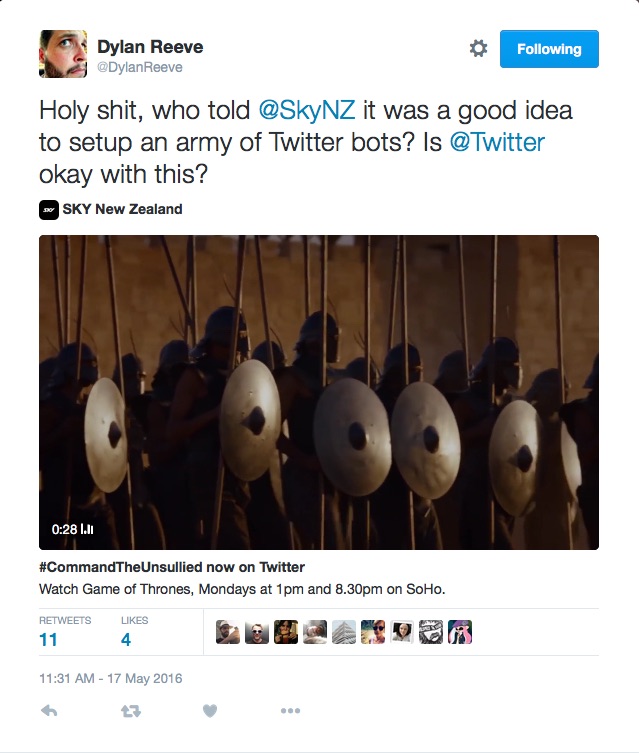 Today New Zealand saw another example of how not to do social. Dylan Reeve’s tweet alerted me to it.

Watching the video contained in it raised a number of questions. It turns out that Sky NZ, and their agency (more on them soon), thought it would be a good idea to build an army of twitter bots and make them available to users. To make use of the army all one has to do is tweet to #CommandTheUnsullied with a command and they will do your bidding. This has resulted in a number of people being bombarded with in excess of 900+ notifications, including Dylan and Jordan T. With Dylan calculating that the project has potentially sent around 138,000 tweets so far.

While I was trying to work out exactly how the process was working I used a test Twitter account I have to send a command to the hashtag. This response came from an app called “Unsullied Army”, this presented a chance to track down the people behind the campaign. The app had the following URL associated with it:

I did a Who.is trace on ddbdigital.co.nz URL:

Which is owned by DDB Digital, who are apparently “NZ & Australian digital agency of the year”.

The use of this approach raises a number of questions. There is currently an on going debate in New Zealand about the issue of cyber bullying, which it is posisble for this to system to be used to carrying out. Now Sky TV claim that all the commands are “monitored and approved” before being sent out “to avoid abuse”:

However even Sky’s own promo video suggest this will be used to bombard people with notifications:

In addition they claim that Twitter is on board with their campaign:

So it appears that both Sky TV and DDB Digital foresee how this campaign would be used. But they have taken two views, one that people would have no issue with being bombarded with 2000+ notifications at a time, two that the abusive nature of interactions will be obvious to an outsider looking at a single command. They appear to have not foreseen how what may appear to be an innocent bit of fun to someone sitting in an office in Auckland could be part of a longer term record of abuse and harassment. This suggests that those in a position of power within the agency and Sky have an inability to see the dark side of social media, and how this “fun” campaign could be used. I have sent an email to DDB asking exactly what they did to minimise the ability for it to be used to abuse people, and I am still waiting on a reply. However this should serve as a cautionary tale that just because your agency is award winning, that doesn’t mean they are always going to hit the nail on the head. It also suggests that there is a need for a more diverse range of life experiences within the staff of agencies and corporate social media.