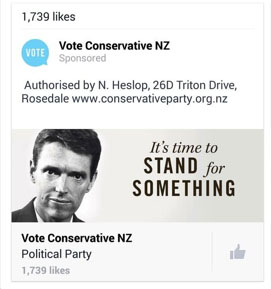 The issue of what needs to be authorised is a bit of a grey area for those of us who aren’t lawyers/electoral law lawyers. It becomes even more grey when it comes to social media/web based ads. One thing that has been drawn to my attention is different parties running sponsored ads for their pages. This is a pretty run of the mill way to gain likes for a page, which is what any organisation with a Facebook page is going to want to do.

Now the ads below were spotted on Facebook. One of them is not like the rest, in two respects. The Internet Party ad doesn’t have an authorisation  statement on it. When I first saw it, my immediate reaction was why isn’t the Internet Party ad authorised. Though the other thing that singles it out, is the fact that it doesn’t ask you to vote for them, or to do anything else that could be construed as encouraging people to vote for them. This is the important element.

I have used this quote before, but it is the key element:

All election advertisements irrespective of when they are published must state the name and address of the person that has initiated or instigated them (‘the promoter’). [See section 204F of the Electoral Act].

But the question is, does an ad promoting people to like a Facebook page meet the following requirements:

I started out thinking that it would be a clear case of it lacking a required authorisation statement. However, I don’t see how the ad is able to fall into any of the above categories.

However, it does raise questions about rules for main stream ads to social media ads. Would a party publish an ad in a paper that didn’t contain any reference to their policies, or comparisons to other parties policies? I don’t think they would, but because it makes sense to do so on social media, as a way to get them to connect with the party, they don’t have to be authorised, or there is at least a possible argument that they don’t need to do it. The Electoral Commission also says:

This could be argued to apply to Facebook ad, because that ad links directly to the page, which should have an authorisation statement on it.

So is the Internet Party in the right or in the wrong with its ad not having an authorisation statement? I don’t know, but the fact that there are questions makes you wonder about how easy to understand the law actually is.