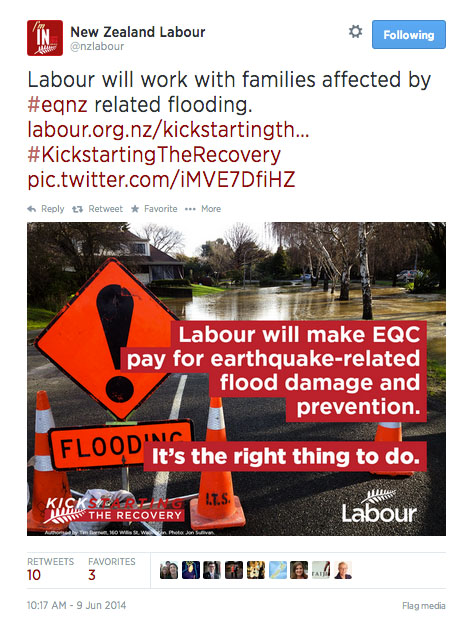 On Monday this week Labour announced their new Christchurch Earthquake recovery policy. Now it is pretty easy to see that the ongoing rebuild of Christchurch will be a key issue, particularly for voters in the Christchurch region. Labour have announced a number of polices, dealing with the flooding in certain parts of the city, potentially caused by ground level drop following earthquakes, and dealing with the issue of delays in earthquake claim settlements. This is apparently just stage one, so there will be more to come.

The first thing that struck me about Labours policy announcement is that the policy was released by David Cunliffe before 0800 on Monday, TV3 posted their first story about it at 0750, yet their first social media graphic didn’t go out till 1017, with David Cunliffe’s account tweeting a link at 0958. There wasn’t even a tweet from either David or Labour’s account to alert people to the policy being announced.

However, despite these issues with not pushing out graphics over social media around the same time as the policy announcement, when they did get around to posting graphics, they were pretty decent. There is a bit of a clash with the Labour red and the road sign orange, plus the image feels a bit cramped. But they are minor complaints about the graphics. It was a clever idea to use the #eqnz hashtag, which I know in the past has been both actively used and followed. Not sure how much use it is these days, but it is a sign that labour are

Later in the evening they posted this graphic:

Simplicity is the key word for this graphic. Image of an iconic Christchurch landmark, with a quote that appeals to New Zealanders sense of fairness. It is a similar approach to what John Key’s account attempted the other day, but I think this one is better executed. David’s name is more prominent, but so is the Labour branding, which reinforces that this is a Labour policy, and needs a Labour government.